Some people find the hustle and bustle of Missions Fest a little overwhelming. Here’s a perfect solution – the Prayer Room is open throughout the conference weekend, which runs from Friday noon to Sunday, 5 pm (January 29 – 31), at the Vancouver.

The point is, there’s something for everyone at Missions Fest. Vancouver is so blessed to have had this focal point for ministry over the past few decades. I urge every member of the Christian community to get down there over the weekend, to meet old friends and to learn about some good work you didn’t know about.
The theme this year is ‘Mission: Being or Doing,’ so some of the talks and workshops will be focused not so much on how you can get active as on how you can participate creatively in missions.
Keynote speaker Richard Cunningham, director of UCCF (the Christian Unions) in the UK, wrote ‘The Search for Identity’ for the Missions Fest magazine. In it he asked:
Who are you? Are you what you do or is what you do an overflow of a deeper identity? . . .
We know who we once were, God’s unfallen image bearers, and who we have become in Jesus, who is the image of God. We are increasingly becoming, more and more like Christ. We are therefore integrated, whole people who must live lives that are true to who we are, once were and are becoming. This is where we will derive joy and energy for mission.
As followers of Jesus, we are not acting or playing a part (which is always exhausting and deeply unsatisfying), but we are being and doing what we were made for. If this does not lead to active, committed and devoted mission then I have simply missed seeing who I am in Christ and the need to find others from all the nations who are to be part of that magnificent and glorious day (Col 3:4).
Among the highlights of Missions Fest this year:
* Four excellent keynote speakers: Danielle Strickland (see accompanying article); Richard Cunningham (referred to above); Jamie Taylor who works for OMF International, which was started by his great-great grandfather James Hudson Taylor, and has a wealth of first-hand knowledge about the church in Asia; and Michael Oh, who as a young Korean man became a missionary to Japan and is now executive director / CEO of the Lausanne Movement.
* There are a couple of hundred exhibitors, covering a wide range of activities. Some represent fairly traditional missionary work overseas, while others are active in justice ministries, and others again work with local camps, schools and street ministries.
* Dozens of seminars also cover a very wide range, from how to share your faith with a Muslim and working in northeast Thailand to how to avoid burnout and how to be authentic before doing anything.
* The Film Festival is now in its seventh year and is always very popular. There is an arts cafe, live music, youth events . . . the list goes on.
Common Grace 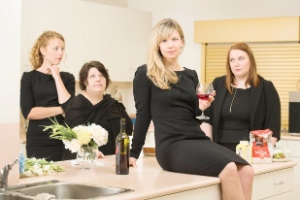 After spending six months running from her past, Colleen is forced to return home for her father’s funeral. Between the flowered cards, casseroles, over-priced caskets and hidden bottles of wine, she must decide if she can fit into the world she left behind. A provocative and relatable family drama.
Dana Gee interviewed Johannesen in The Province January 25. Here is a portion:

The whole play takes place in an actual functional kitchen (real food is made) with only three other characters showing up to interact with the mother and her daughters.

“You just end up in the kitchen,” said Johannesen, who also plays the key role of Colleen (one of the daughters) in the play.

“That’s where everything happens. Somebody’s cooking or they are getting stuff ready. You just gather there. It’s the informal place and to me it is the heart of the house.”

It’s here, in the kitchen, that all manner of topics are covered and emotional guards are let down. Dealing with their grief the family begins to reveal themselves as they try to understand and learn more about each other and how they have ended up where they are.

She isn’t too nervous though, as she has been involved in the development of Common Grace from the beginning. As part of Pacific Theatre’s “Working With” play development program, a handful of select playwrights have met every couple of weeks for the last two years to read and provide feedback on each other’s work. Like the upcoming production of Common Grace, the end result is a staged production at Vancouver’s faith-based theatre company.

“It really has helped to have been part of the play development process,” she says. “The great thing about being in it from the beginning is how you feel like you’ve come to know the people.” 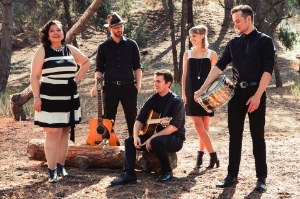 The Eagle Rock Gospel Singers will be at the Media Club this weekend.

I’d never heard of the Eagle Rock Gospel Singers, but when I checked out three songs on their website I became convinced they’ll put on a great show at the Media Club this Saturday (January 30). They would complement a day at Missions Fest nicely.

LA Weekly had this to say about them last summer:

“We were covering stuff by artists who were doing it in the ‘30s, ‘40s and ‘50s,” says drummer-singer Will Wadsworth. “The stuff that resonated with us was coming from people who were singing out of a place of desperation, sometimes heartache, sometimes complete joy. . . .

The band’s debut album, Heavenly Fire . . . is a rip-roaring, soaring batch of rootsy-flavored originals written by the band’s individual members, who took their songwriting cues from the greatest and most venerable of American trad musical genres. . . .

“Gospel music for a lot of people is defined by the content,” Wadsworth says, “and that’s usually traditional stories that are based in what we have known as the Bible of Judeo-Christian beliefs. These orations wove themselves into music that was very white bluegrass music, very white folk and country music and very African-American blues gospel.” 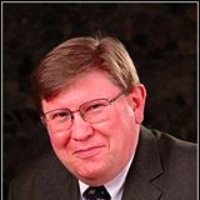 Richard Leggett will lead What is Christian Worship? at Holy Trinity Anglican Church. Leggett, rector of St. Faith’s Anglican Church and professor emeritus of liturgical studies at Vancouver School of Theology, “will discuss Anglican liturgy to inform and explain the ways in which we worship.” While the presentation will be aimed at one stream of the church, most churches in Canada have been influenced by that stream.

A few blocks to the east, at Tenth Church, Worship Central is offering a Worship Leaders Hub: “The first hub of 2016 in BC will be a joint one! Come worship, pray, dialogue with other worship and church leaders, and dream together about how we will shape this ministry in 2016 for our own regions.”

Maybe a few people will want to take in part of each; or possibly even attend the one that they wouldn’t normally go to. 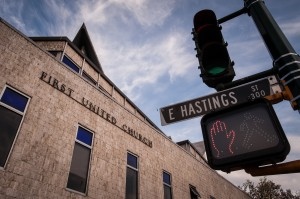 First United is on the southeast corner of Hastings and Gore.

There will be all kinds of change at the corner of Hastings and Gore in the Downtown Eastside over the next few years, most of it relating to current or former church buildings.

The redevelopment will include the construction of a large building with new housing units, [spokesperson Heather] Forbes revealed. But she quickly emphasized that any structure built at 320 East Hastings Street will be “low-rise” and designed for the low-income people the church caters to today.

That’s the southeast corner.
Directly across the street, according to a January 26 article in The Vancouver Sun, the “former Salvation Army Temple may be torn down for social housing”:
The elegant building . . . has been a local landmark since it opened in 1950. Built by the Salvation Army as its Vancouver headquarters and temple, it boasted an auditorium for 700 people, a basement gymnasium, a kitchen and offices. . . .
In 1984, the Salvation Army sold the building to the Gold Buddha Monastery for $900,000. The Monastery sold it in 2001, when it moved to a new building in Mount Pleasant.
That’s the northeast corner.
And a January 26 article in Vancity Buzz reported: ‘New building with 104 social housing units approved for Downtown Eastside.’
According to city documents, the 120-foot-high, 12-storey building will be outfitted with retail on the ground floor and 172 residential units on the upper floors, including 104 units of social housing, 68 units of market housing, and six units of handicap housing. As well, 35 units of the social housing stock will be rented at income assistance rates of $375 per month.
That’s the southwest corner. The Downtown Eastside is changing quickly.

← Around Town: The New Vancouver, Responding to Primates, Freedom Singer
Vancouver’s stony soil: The church in the secular city →