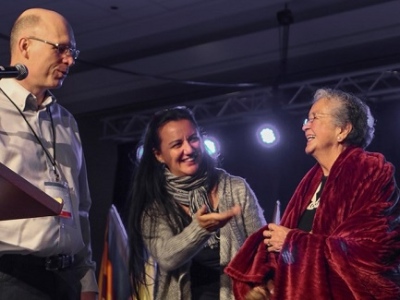 Mary Charles (right) welcomed Missions Fest to the traditional unceded territory of the Coast Salish First Nations. With her are John Hall and Cheryl Bear.

This is a very welcome move. John Hall, executive director of Missions Fest Vancouver, recently sent out this message:

I want to express my thanks to Mary Charles from the Musqueam First Nation who welcomed Missions Fest to the traditional unceded territory of the Coast Salish First Nations [January 30].

As Christians, we ought to be and are interested in the ongoing process of healing and reconciliation between people groups.

Missions Fest – as a gathering of Christians in Metro Vancouver on the traditional lands of the Musqueam, Squamish and Tsleil-Waututh First Nations – should model ways to build bridges and foster dialogue between our communities so that healing can continue.

Being welcomed to this territory is a form of social license very much like welcoming a guest into your home. We appreciate that a welcome is a beginning and look forward to having further opportunities to share Christ’s love in our future interactions.

The City of Vancouver acknowledged last summer that Vancouver has been built on unceded Aboriginal territory. “Underlying all other truths spoken during the Year of Reconciliation is the truth that the modern city of Vancouver was founded on the traditional territories of the Musqueam, Squamish and Tsleil-Waututh First Nations and that these territories were never ceded through treaty, war or surrender,” reads part of the motion passed unanimously by city councillors.

The city said it would work with representatives from the Aboriginal community to determine “appropriate protocols” for conducting city business.

We were challenged by hearing Brander McDonald [the indigenous relations coordinator for Mennonite Church BC] . . . challenging us to recognize the territory on which our church lies. We decided that this would be a simple, visible first step in our ongoing intentional journey towards greater understanding of our Indigenous neighbours and the building of relationships, and so we put the following statement in each week’s bulletin and on the homepage of our website: “We at Langley Mennonite Fellowship acknowledge our presence on Stó:lō Kwantlen land and are grateful to our first nation hosts.”

Langley Mennonite Fellowship is the first Mennonite Church BC congregation to take that position.

Catholics on the move 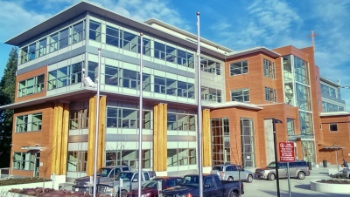 The doors of Vancouver’s new Catholic headquarters will open March 2 near 33rd and Willow.

A recent press release announced that Roman Catholics in Metro Vancouver will have a new headquarters by the beginning of March:

After nearly 60 years in the downtown core, the Archdiocese of Vancouver is moving its administrative offices to the 33rd and Willow area on the site of a ‘Campus of Care’ being developed by Providence Health Care.

The administrative headquarters of the Catholic Church in the Lower Mainland, along with more than 100 full- and part-time employees and the many ministries and services such as the Catholic Independent School Board, Service and Justice, the B.C. Catholic newspaper and Youth Ministry, will take up residence in the new John Paul II Pastoral Centre March 2. The just-completed four-storey building is on a newly named Saint John Paul II Way, southeast of B.C. Children’s and Women’s Hospital.

The former St. Vincent’s Hospital stood on the site for 65 years until it was closed in 2004, its health services relocated to other sites run by Providence Health Care, one of the largest faith-based health-care organizations in Canada.

The Archdiocese has occupied its present Yaletown location, 150 Robson Street, since 1958, when it moved into a converted warehouse formerly owned by Northern Electric Co. Archdiocesan officials said the current building, built in the 1920s, was no longer suitable for use as administrative headquarters for the Archdiocese. In addition to needing a great deal of maintenance, repairs and upgrades, its original warehouse design meant space was inefficiently utilized. Parking in the area also frequently posed a challenge.

Archbishop J. Michael Miller, CSB, said the current structure had out-served its purpose and it was time to find a long-term home elsewhere in Vancouver. “It is important that the Church’s administrative offices remain centrally located in Vancouver, but the existing building can no longer adequately serve the needs of the community or the Archdiocese, ” said the Archbishop.

The new pastoral centre is more central geographically to the rest of the Archdiocese of Vancouver, which has more than 120 churches and schools extending as far east as Hope. In addition to being purpose-built as an office building, it is handicap accessible, something the old building lacked.

The cost of the new pastoral centre is about $25 million, largely paid for through the sale of the old building to Amacon, a Vancouver real estate developer. No plans have been announced for the old pastoral centre, a designated heritage building.

The Archdiocese had hoped to move in just before Christmas, but were delayed by a number of factors, including the discovery of a massive slab of unearthed concrete, having to lay out a system of canals and spill gates to siphon off rain and completing a ‘green roof.’

For more on the move, go here and here.

Another major denomination will be moving this spring. The Diocese of New Westminster plans to move from its current location downtown on Georgia Street to St. John’s Shaughnessy Anglican Church. 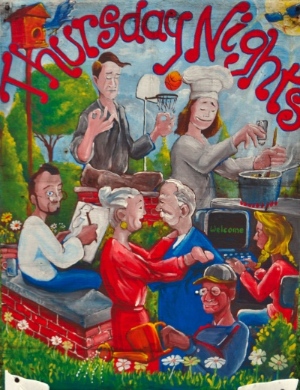 South Vancouver residents were saddened last year when Marpole Place, a service known by some as Marpole’s community connection for nearly three decades, quit operations. Both Marpole Place and its operator, the Marpole Oakridge Area Council Society, became inactive, but organizers hoped its programs, including a popular weekly dinner, could be restored if more funds and a new home were found.

Their prayers have been answered, at least for a few months. City hall gave money to hire seniors’ outreach coordinator Jessica Fiddler until April, and new programs have found a home at St. Augustine’s Anglican Church on 8680 Hudson St. at West 71st Avenue.

For an earlier story about the situation on Church for Vancouver go here.

“Nothing of what we have done here historically in serving TWU will be lost,” said Christine Jones, president of the college, as she launched the rebranding ceremony February 4. TWU President Bob Kuhn offered his prayers and encouragement for Catholic Pacific College’s new strategic vision. 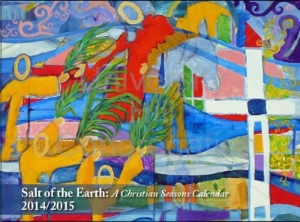 Artists are invited to participate in the upcoming issue of the 2015/2016 Christian Seasons Calendar. The calendar, produced by University Hill Congregation on the UBC campus follows the distinctive seasons of the Christian year and is distributed worldwide.
Here is part of the announcement:

Interested artists are encouraged to offer artwork that interprets scripture readings and themes within the Christian Year. A list of the scripture readings used in Year C of the Revised Common Lectionary can be found at lectionary.library.vanderbilt.edu.

There is one page available for an image for each of the following seasons: Advent, Christmas, Epiphany, Lent, Holy Week and Easter. There are five pages available for art in the Season after Pentecost. On these pages we seek images that portray Pentecost, All Saints Day and the Reign of Christ as well as images particular to biblical texts included in the lectionary readings during this season of growth in discipleship.

One local artist was chosen for the 2014/2015 calendar. Kelly Dycavinu (Pentecost 3) “is an artist and writer who likes to explore the relationship between words, images and identity. She believes how we view ourselves and others around us is largely impacted by the stories we see, hear and tell. Kelly holds a Bachelor of Fine Arts from the University of British Columbia and is currently completing a Masters of Arts in Theological Studies at Regent College in Vancouver.”

The deadline for submission is April 20. Go here for full information.

← ‘Dignity for All’ challenges next federal government to end poverty in Canada
Missions Fest: Ede Clarke and Gotta Go serve those without a voice in Asia →