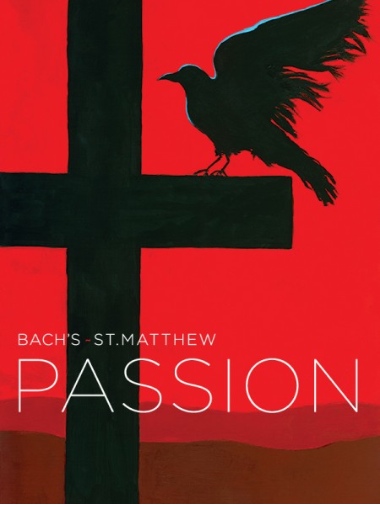 Easter approaches, and with it much beautiful music. This year, Bach’s St. Matthew Passion must surely be the most eagerly awaited by those who appreciate sacred/classical music. The Vancouver Bach Choir, with help from the Vancouver Symphony Orchestra, will present the masterwork at the Orpheum this Saturday (March 19).

Writing in The Telegraph a few years ago, critic Damian Thompson said of the work, which was composed for a Good Friday service in 1727:

Bach’s St Matthew Passion is the ultimate depiction of the torture and (attempted) murder of Jesus Christ: the most beautiful, the most harrowing and the most innovative. And, if you are unlucky enough to get trapped in a bad performance, the most boring. Unlike Handel’s Messiah, it doesn’t provide amateur singers with bouncy tunes suited to wobbly voices. . . .

Despite its indisputable greatness, this immense musical diptych of Jesus’s ordeal can be an ordeal in itself – even when the performance is a fine one. It’s a bit like a Wagner opera: you’ve got to be in the mood and you have to do some work.

So it might be tough on the novice listener. One suggestion Thompson makes is to take along a copy of Victor Lederer’s 132-page guide to St. Matthew Passion (one copy of which is available at the Central Library). Pooh-poohing the notion that “you shouldn’t read while listening to a piece of music,” he points out that “one of this book’s many virtues is that it unfolds at roughly the same pace as the St Matthew Passion itself.”

(Another insight from the book is that it “explain[s] Pietism [one of the key streams of evangelicalism]. This largely forgotten theological movement lies at the heart of Bach’s cantatas and Passions.” Former Trinity Western professor Douglas Shantz prefaced his Introduction to German Pietism with this quote by Carl Hinrichs: “Pietism and church music have been characterized as ultimately the two great creations of German Protestantism.”)

Another sign of the season are JustPotters’ cross-making workshops. They’ve been on for a while already, but according to their website can be booked any time before Easter. JustPotters is a social enterprise business which is part of JustWork.

I sometimes wonder if CBC radio – the only station I ever listen to – steers away from interviewing Christian ministries (why we don’t hear more from World Vision, given its size . . .). However, this week I heard three good interviews: 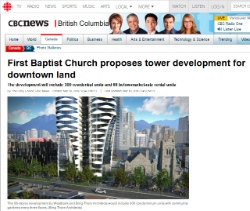 1. Rick Cluff, host of The Early Edition, had a good chat with First Baptist Church’s executive minister Abraham Han about the 56-storey building and seismic upgrades planned for its property at Nelson and Burrard in the downtown core, on the eve of a city-sponsored open house March 10.

In a related article on CBC’s website, Han noted that the church has been active in the neighbourhood for 105 years:

The development, built in partnership by Westbank and Bing Thom Architects, will not only create 300 residential units, but also 66 below-market-rate rental units [in an eight-storey building], community gardens and space for other social services.

“We really want to build a space that is inviting to the community and that is caring for the community,” said Abraham Han, executive minister at First Baptist Church.

“We’re looking at seniors, street community, young families, refugees, people who are coming from different countries so ESL programs. We’re looking at all those things including affordable housing.”

The development will also include a shelter, daycare and kitchens for the homeless.

“We want to provide the ability for people to live in the city and not be pushed out,” said Han. 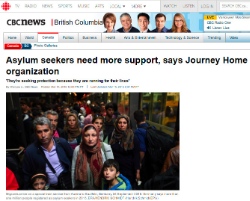 2. On the 15th, Cluff interviewed James Grunau, executive director of Journey Home Community Association, about its plans to train community and church members to help asylum seekers. Journey Home supports refugee families with transitional housing in the Burnaby / New Westminster area, and late last year sponsored an evening (The Refugee Crisis: Ways to Respond) with Chris Friesen, director of settlement services for Immigrant Services Society of BC (ISSofBC), so churches could learn more about how to welcome Syrian refugees.

Asylum seekers are people who apply for refugee status once they are already in Canada. Asked by Cluff why Journey Home is launching a training program for those who would like to help asylum seekers, Grunau said:

Well, we’ve been looking at this actually for probably a number of years. We’re a small organization – we have four core staff – and so we know that we can’t address the need, but as we’ve gone about our work and worked with volunteers, we believe that there are community members and groups that could do what we’re doing.

But they need some training and some coaching and mentoring, and over the last six to eight months as we’ve seen the refugee climate really change in Canada, and the groundswell of support, it has allowed us some extra resources and some opportunities to launch this program. 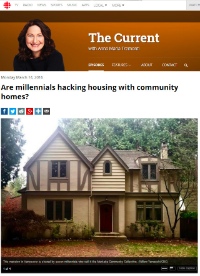 3. The connection is a little less obvious in the third case, but is still interesting. The Current with Anna Maria Tremonti ran Willow Yamauchi’s documentary The Housing Hack, which started with these words:

My daughter just turned 19. She’s an adult, a millennial, and understandably she’d like to have a place of her own. The problem is, we live in Vancouver.

The 22-minute documentary focused on two homes – Merkaba Collective Community in Vancouver and the Atangard Community Project in Abbotsford, along with comments from Vancouver City Councillor Geoff Meggs.

Yamauchi introduces Atangard with this sentence: “In the City of Abbotsford, 12 millennials sit around a long wooden table illuminated by a large green chandelier. . . . living communally in this old hotel, their experiment is known as the Atangard Community Project. . . . It still looks like a hotel, but what strikes me is how many of the bedroom doors are open. . . .”

She spoke with 32 year old Sophia Suderman, who has been involved with Atangard since before renovations and move-in (2009).

Suderman described the beginnings of the community – which has now been home to at least 100 people – as “kind of happenstance.” She and a group of friends were looking for a place to stay and noticed that the boarded up hotel was available for lease. Before long, though, they were planning an intentional community.

Atangard is open to all kinds of people, but there are Christian roots. In a 2011 article by Jeremy Postal in Converge magazine, she was quoted as saying:

The Atangard Community Project is an experiment that explores living together as a means of integrating our priorities and beliefs into a way of life that works within this society. We aim to create an opportunity which facilitates our ability to love God and love our neighbours in an honest and practical manner.
We have no intention or interest in an exclusive Christian living arrangement. We are building a foundation which bases our love for one another on the example of Christ, and offers acceptance to all who reside among us. People will be treated with respect and compassion, without partiality.

Suderman did a timeline and video of Atangard’s history. To hear the full Housing Hack documentary go here.

A couple of events which highlight the critical state of housing in Vancouver and the strong desire for community are coming up later this week: 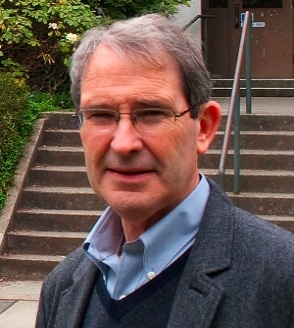 David Ley will be with City in Focus at the Vancouver Club March 18.

1. UBC urban geography professor David Ley will lead Make Vancouver Home: But How Do We Afford to Live Here? for City in Focus this Friday morning (March 18) at the Vancouver Club. Ley has authored many publications, including Millionaire Migrants, which explores how wealthy Asians have radically transformed real estate markets in Vancouver and other Pacific Rim cities. He recently said, “The generational issue is huge. So many young people are leaving the city. I’m surprised it’s not a greater public issue in BC.” Well, it is this week, in all the local media. 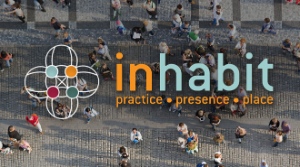 Another upcoming community-building event is the Inhabit Conference, April 15 – 16 in Seattle. Headlined by Shane Claiborne and many other urban/community pioneers, Inhabit will have this focus:

An exciting movement is growing across North America as churches from every background join the ongoing work of God in their neighborhoods – a movement that explores the potential for change in the unique facets of every community.

This year we ask the question: How does this change happen?

For anyone who has appreciated books like The New Parish or Slow Church, Inhabit should be worth the drive; I attended one of their conferences and came away with many new insights and contacts. Check out the link at the top of this page. 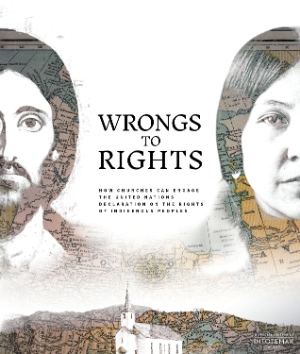 In Wrongs to Rights, over 40 authors from diverse backgrounds – Indigenous and Settler, Christian and Traditional – wrestle with the meaning of the Declaration for the church. With a firm hold on past and present colonialism, the authors tackle key questions that the Declaration and the TRC’s call to “adopt and comply” raises: What are its potential implications? How does it connect to Scripture? Can it facilitate genuine decolonization, or is “rights talk” another form of imperialism? And what about real life relationships? Can the Declaration be lived out – collectively and personally – on the ground?

Contributors include a couple of well known names (Walter Brueggemann, Ched Myers), but also at least one local person – Laurel Dykstra, who is coordinating the Salal and Cedar Watershed Discipleship Community for the Anglican Church. Editor Steve Heinrichs is a familiar name in this area too; before becoming director of Indigenous relations for Mennonite Church Canada in Winnipeg, he pastored a church in northern BC. He also edited the widely praised Buffalo Shout, Salmon Cry.
In a related vein, Streams of Justice will be looking at the theme Pushed Off the Land during one of their ongoing Faith and Justice roundtables:
On this occasion, we’ll be exploring our relationship to land as it pertains to people migration, unpacking the various ways people are displaced from their homes / lands / communities and forced to settle elsewhere. We’ll be looking at the political, social, economic and personal causes and impacts of displacement and migration, and reflect on these issues in light of the biblical witness.

Glad Tidings pastor Sandro DiSabatino recently won a retreat for his family at Stillwood Camp and Conference Centre in the Fraser Valley. He was nominated for the prize in an ‘appreciate your pastor’ contest sponsored by Faith Today magazine:
In January we invited churches from across the country to submit the names of their pastors for a contest, offered in partnership with spiritual retreat centres from coast to coast. We wanted to invite churches to show their appreciation for the hard and sometimes thankless work done by our pastors.
The person who nominated him wrote:
Pastor Sandro and his wife, Rebecca, lead our congregation in some deep studies of the Word. They not only teach it, they live it. They care about the members of their congregation.

← What if every home were a church, hosting feasts around Jesus?
Smita Singh helps girls escape Kolkata’s infamous red-light district →