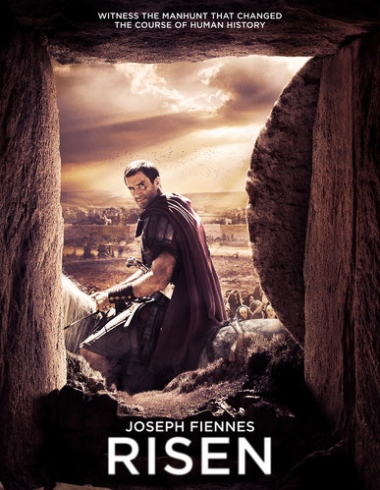 Joseph Fiennes seems to have a penchant for faith-based movies. He played Martin Luther several years ago and will soon take on Eric Liddell, the Olympic champion / missionary to China. And in his most recent project – Risen (due to open February 18) – he plays a Roman officer named Clavius who takes part in the death of Jesus and is then told to find the body after it vanishes from its tomb.
Local movie guru Peter Chattaway has been following the production of Risen in considerable detail on his FilmChat blog, and interviewed Fiennes last month.
Fiennes described what drew him to this story:
. . . And when I read [the script], it was really the detective story. I had never seen a biblical movie with such momentum, the sense of a ticking clock, and I felt cinematically this was a beautiful device. I also loved the idea that we should visit a story that many of us know very, very well, and even if you know it a little bit, you’re going to get carried through the lens of a non-believer, a skeptic – and not only a skeptic but a man who was there and oversaw the death of Christ, the crucifixion of Christ. I thought was really exciting and original. And that was the hook that got me in.
When asked what he hopes audiences will take away from Risen, Fiennes answered:

. . . What I would love is that audiences, both from a faith-based and a non-faith-based and a cinephile audience could all fill the auditorium and share the space together, and harmoniously enjoy the cinematic feast that is both true to scripture and creatively wonderful. Because there’s so much kind of polarization between something that’s too conservative or something that’s too revisionist, and my dream is this is maybe one of the first times that we get everyone in the room together, and happily so. So that would be my dream.
Go here for the full interview and here for Chattaway’s round-up of Fiennes interviews, including one about Fiennes going to Rome to meet Pope Francis.
Jenny Hawkinson: Becoming Human
“If you have any interest in art, peace and reconciliation, Israel/Palestine, human dignity and solidarity, take a look at my upcoming project!” That’s Jenny Hawkinson’s request as she gets set to leave for the Middle East early next month.
The local artist is looking to raise $8,500 USD (and is about half way there as of February 17) through an Indiegogo site to fund participation in Becoming Human, an “artists’ solidarity pilgrimage” to Palestine and Israel from March 2 – 30.
Hawkinson describes the trip in this way:
This project is part pilgrimage and part artist residency. We will be partnering with the Dar al-Kalima University College of Arts & Culture and the Holy Land Trust in Bethlehem. We aim to engage with the every day lived experience of Israelis and Palestinians to create and share stories of hope found in the struggle for human dignity through creative writing, photography and visual art. We believe that by exploring the intersections between our stories and those of “the other” through art, we will be able to look critically at our own roles in creating a shared future of human dignity, peace and justice.
She says that following this “art pilgrimage” they will publish a book and show curated art exhibits in venues throughout North America.
Hawkinson works with Mission Possible; she oversees MP StudioWorks, whose purpose is “inspiring the creative energy of the Downtown Eastside”:
MP StudioWorks is a studio space and gallery that seeks to inspire the creative energy of the DTES community. Together novice and experienced painters, carvers, potters, sculptors and musicians explore artistic expression and entrepreneurship as a pathway to lasting change.
She was also featured in WeMakeStuff, Volume One, a groundbreaking book featuring 100 local artists and innovators.
Coldest Night 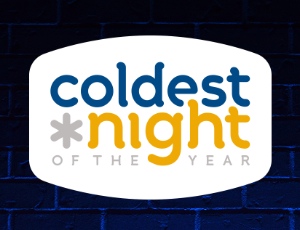 This Saturday (February 20) several local teams will walk for a good cause with Coldest Night of the Year, a “family-friendly walking fundraiser that raises money for the hungry, homeless and hurting in 100-plus communities across Canada.” Since 2011, Coldest Night has raised $7.9 million dollars; this year 91 charities across Canada are joining the walk.
Several Metro Vancouver groups are taking part. For example, the Cloverdale Community Kitchen / Options Bill Reid Centre are teaming up to raise $70,000 to share between the two projects. 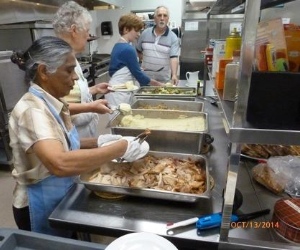 More than just a soup kitchen, we hope to create a thriving place where people can come together to learn, to work, and to help each other. Our vision is to help Cloverdale be a healthy and caring community. We believe that lots can happen around food. We invite you to join others as we seek to create a networking hub of activity so that good things continue to happen in Cloverdale.
The church has worked with a number of groups to make the kitchen a reality, including the Cloverdale Chamber of Commerce (through Bill Reid) and the local RCMP; In 2013 they were awarded a Surrey Homelessness and Housing grant to establish the Cloverdale Community Kitchen. For the history go here, and to support or participate in the walk go here.
The kitchen offers three evening meals each week. Host Pacific Community Church takes care of Monday, while Cloverdale Christian Fellowship and Cloverdale Presbyterian Church look after Wednesday and Friday respectively. 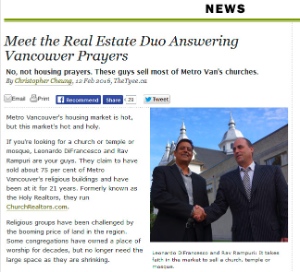 Christopher Cheung interviewed Leonardo DiFrancesco – one half of a real estate duo who have been selling church buildings for the past couple of decades – February 12 for The Tyee. Here is part of the introduction:
If you’re looking for a church or temple or mosque, Leonardo DiFrancesco and Rav Rampuri are your guys. They claim to have sold about 75 per cent of Metro Vancouver’s religious buildings and have been at it for 21 years. Formerly known as the Holy Realtors, they run ChurchRealtors.com.
The used to advertise with BC Christian News when I was there, though they’re more about selling the buildings than about any particular faith:
We’ve sold every type of faith, from Buddhists to Jehovah’s Witnesses, Pentecostals to Evangelicals. Muslims, Sikhs, Hindus, basically every monopoly of church there is.
How’s the market now compared to 20 years ago?:
Churches are extremely high-priced and extremely rare. Lately the market’s crazy. Developers are scooping them up. We used to have six or seven churches for sale at a time. Now, nobody has six, seven churches for sale. We get one, and it’s gone. It’s the same thing as the housing market. As long as the price is reasonable, they go really fast.
DiFrancesco doesn’t seem like a sentimental type, but he does hate to see old church buildings torn down:
I don’t like it. Me and my partner would like to sell them to groups to keep the churches alive, but it’s out of our control.
The full interview is worth reading.

← Month of Prayer for Missing and Murdered Indigenous Women and Girls
Aging Matters: Recovering the value of being an elder →